« Scott Pilgrim vs The World
Phones, Tablets, and the Future »

Things I Am Fascinated With #1

Hallway-Long History Exhibitions That Do Not Reside In Museums or Other Such Buildings of Record, Except Possibly Libraries, Depending On How Large and Museum-Like the Library Is. 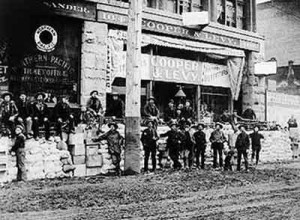 The other day, I found myself utterly captivated by a long pictorial exhibition of Seattle during the Klondike Gold Rush. As I wandered down the long hallway upon whose walls these sepia toned memories hung, I realized the great incongruity of my experiences with these pieces and the experiences of the hurried businesspeople who walked the halls alongside me. As their shoes and rolling laptop cases CLICK-CLACKED down the subterranean tunnel between the Hilton and the conference center, I heard instead the sounds of the Seattle train yards of the 19th century. They were rushing to meetings; I was mentally running my fingers over the leather and wood seat of a merchant’s stagecoach. And while they chattered into their cell phones, it was all I could do to keep my teeth from chattering, so real was the icy chill of Chilkoot Pass to my imagination. 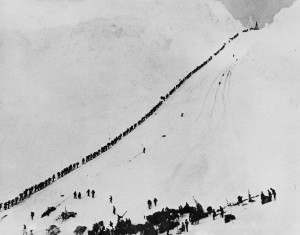 In the hour or so I spent poring over these images, no one else so much as slowed their pace to look. It made me wonder– had I ever seen anyone else read the information cards next to the Native American vases in the cases at the San Francisco Airport? Had I ever seen anyone else read the placards next to the collection of Art Deco radios in the lobby of that hotel I stayed at one time? Was I the only one who ever stopped in lobbies and hallways and accent alcoves to read and to examine and to learn the things that other people thought were important enough to put on display?

I could think of only one other person who I had ever seen attack the world’s free and public knowledge the way that I did: my father. I imagined that he had gathered these photographs, written the descriptions, and hung them on the wall in that perfect, flawless way that he does everything, right there underneath downtown Seattle, just for me to find.

And in a way, he did. If he hadn’t shown me how to be interested in everything, how to learn, how to explore, I never would have stopped, never even noticed that the CLICK-CLACK of my shoes was reverberating off of any history at all.

This entry was posted by cwknight on 07/29/2010 at 09:00, and is filed under Observation. Follow any responses to this post through RSS 2.0. Both comments and pings are currently closed.