« Phones, Tablets, and the Future
Crosswords »

On The Victrola: Tron: Legacy Soundtrack 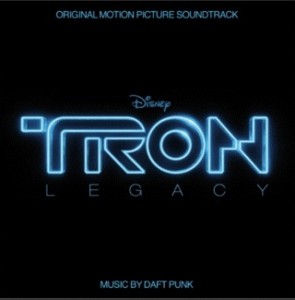 With talk that includes comparisons to James Cameron’s Avatar, Disney’s Tron Legacy is getting some incredible hype as it leads up to its release next week. Leading the surge of Tron preview media content was the release of the original score, created by French-electronica-legends Daft Punk.

I’ve been listening to it a bunch since its release, and I have to to say that it’s top notch. I was surprised by the traditional orchestral elements, but Daft Punk definitely showed off their compositional chops, delivering a score that has the subtle emotion necessary for a film, and a dance beat oscilloscopic enough to satisfy anybody’s head bopping needs. The track “End of Line” is particularly good at tapping into the shared cultural rhythms of the techno-lifestyle, and I can’t help but think that its constituent parts are the sounds of some far future interface, remixed for the here-and-now.

“Arena” does something similar, mixing a futuristic dial-tone with the pulsing beat of a shamanistic drum. The intersection of tech and tribe is reminiscent of the ever present fact that /humans/ are at the other end of our connections. It’s an important reminder that at its core, the Internet is just another update to banging on a drum.

All in all, the soundtrack has made me even more excited to see the movie. If the film can match the pace of the music, we are in for an epic ride indeed.

This entry was posted by cwknight on 12/13/2010 at 10:25, and is filed under Culture, Fun. Follow any responses to this post through RSS 2.0. Both comments and pings are currently closed.