« Tron: Legacy (The Movie, This Time. Not The Soundtrack.)
Some programming things I’ve been looking at »

I Literally Cannot Title This Anything Save “Some Japanese Game”

I can’t quote publications, but I’ve heard that Seattle is 12 times more culturally influential, per capita, than New York or Los Angeles. This is exactly the sort of self-aggrandizing comment that Seattlites love, and you can almost feel the populace rolling this idea around in their heads like a lozenge in their mouths.

But there are some advantages to living in the cliquey yet trendsetting Pacific Northwest. First, it’s very easy to wear stylish clothes, since everyone will be copying you in a half year, and second, we’re used as a test-market for a lot of really cool stuff that we might not otherwise get to see. Ryan and I wandered into Gameworks Thursday evening, and we found an intriguing new arcade game that was pretty clearly being test marketed. Its large size, necessitated by its four networked game machines and a central instruction/spectating kiosk, forced it into an out of the way corner of the arcade, a fact which afforded us plenty of time to study its mysteries.

Unfortunately, one enigma we were unable to solve was its name, which was either written in Japanese or else in a font indistinguishable from same. In any case, we couldn’t read it, and apparently neither could the Gameworks staff, as a small, office printed sign proclaimed that one had to buy a starter pack in order to enjoy “…this exciting new game…” 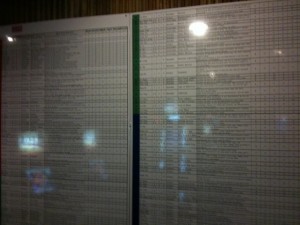 This is a giant chart detailing all of the cards. Do you want to have to learn this bullshit?

I feel like I’m getting ahead of myself by mentioning the starter pack, so allow me to explain. The reason we were so drawn to this game was its obviously unique interface. Instead of a joystick and buttons, each cabinet had a broad, flat surface at table height situated in front of the screen. Small graphics of cards decorated the cabinet, and a quick glance at the game’s attract mode confirmed our suspicions. The table was electrically sensitive, and you played the game by moving cards about the surface. It was a combination card game and video game! Awesome!

But here’s the rub- card games take a lot of time to explain and figure out. Remember the first time you learned (or tried to learn…) Magic: The Gathering? Well, imagine trying to figure out Magic while the electrically pulsing bass waves of the arcade’s soundtrack beat against your skull. Once Ryan and I realized the time and money investment required, we immediately lost interest and wandered away in search of Ms. Pac Man.

And besides, do you really want to be the sort of person who not only plays a nerdy trading card game, but plays one that can only be played at fucking Gameworks?

This entry was posted by cwknight on 12/21/2010 at 09:13, and is filed under Fun, Observation, Technology. Follow any responses to this post through RSS 2.0. You can leave a response or trackback from your own site.