I’m not sure how it happened, but I have become one of those wretched and despicable things. No, not a writer; I am fully aware of how that sickening lycanthropic transformation occurred. I’m referring, rather, to the subtle corruption whose dark seeds germinated in my youth, and took root in my soul as I transitioned into adulthood. It choked my youthful jocularity, dulled my noetic sensibilities, and fertilized the fruits of my despair.

I became, through no fault of my own, a Carny. 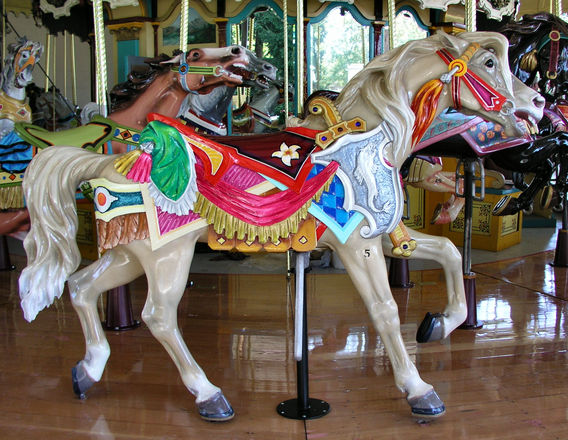 I suppose that it was inevitable; my parents collected and researched the history of antique carousels. My nursery room wallpaper was carousel patterned. Our house was packed to the rafters with carousel memorabilia, , pictures, posters, models, and even a number of actual antique wooden carousel animals. It seems fitting that I should have one day taken a job as a carousel operator at a local zoo.

By accepting that job, I was unwittingly joining the hundred year old fraternity of the gap-toothed and bitter Masters of Amusement. And though it is strange for me to be a part of a group wherein, by virtue of simply having all of my teeth, limbs, and digits, I am considered one of the more attractive of the bunch. I took to the responsibilities of my order like a duck to water by nearly immediately becoming a depressed shell of my former self. Admittedly, this was not hard. What I thought were vast reservoirs of happiness in my soul were in actuality shallow pools of self-hate and the perverse pleasure of the knowledge that I had been severely overvalued as I was growing up. This is what the internal emotional landscape of all young thespians like me looks like. Therefore I say, “Actors, beware!”

All entertainers must wage a continuous war on the despair and malaise that accompanies amusement, the sadness that necessarily arises from continuous exposure to joy. Like the navigators in the sci-fi novel Dune who are submerged to deformity in the drug that enables interstellar travel, so too are entertainers twisted by their submersion in amusement. Some, like actors, are rewarded handsomely for their self-flagellation. Others, like myself, must search for their own meaning and treasure in their trials.

At least, I can say, I am not a juggler.

My job is a rarity in this day and age in the fact that it has remained unchanged for nearly a hundred years. Carousel operators at the turn of the last century dealt with just as many crying children and idiotic adults as I do. The only difference, that I can perceive is that they would have seen significantly more hats and ties than I do, and considerably fewer examples of clothing from Baby Gap.

Their misery must have been the same as mine, arising as it does from the repetitive, monotonous work, the numbing music, and the exposure to the worst of the pleasure-seeking public. But I like to imagine that they found their moments of joy in the same place that I do, in those few gems of personal interaction where people are at their most good. They are rare indeed, but that makes it all the sweeter when someone looks you in the eye and says, “Thank you for helping me to have such a wonderful time with my child.” To see a child pet and kiss a wooden horse is to be reminded of the possibilities of childhood, the simplicity of enjoyment and the willingness to pretend. And to see a grandparent reminisce about the carousel of their youth, and to share those memories with their grandchildren, can warm even the darkest heart.

And though I struggle day by day through the boredom and depressing introspection of my job, I am kept motivated by these small moments of happiness. No one forgets their carousel, the good times they have as a child with their favorite horse, with Mom and with Dad, and with Grandma and Grandpa. It is my job to help make those memories happen, to disappear into the background, a stagehand for the cherished moments of their life.

Everyone remembers their carousel.

Maybe someone will remember me.

This entry was posted by cwknight on 12/04/2009 at 14:16, and is filed under Essays, Philosophy. Follow any responses to this post through RSS 2.0. Both comments and pings are currently closed.