by cwknight in Games, Philosophy 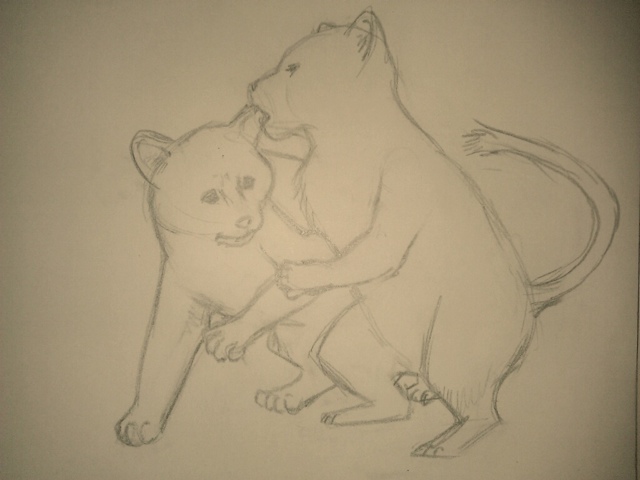 It occurred to me recently that, in the Animal Kingdom, games evolve before “art” does. After all, those of us with pets see our puppies and kitties play games of their own devising every day. Evolutionarily speaking, games are controlled, safe scenarios that symbolically represent some advantageous activity. Animals derive pleasure from these practice activities as a biological function that leads to survival. The fun of games is instinctual.

But we are more advanced than juvenile lionesses play-hunting each other, and when we play, we often ascribe abstract meaning to the mechanical constructs of our games. Birds may sing, but no bird could name their song, “The Four Seasons.”

Thinking about it in this way makes the whole “are games art?” argument seem silly. Art, of course, is the creation and interpretation of symbols. These symbols are myriad, encompassing limitless forms. Nothing else must really be said.

by cwknight in Essays, Observation, Philosophy

This morning, I woke up terrified.

I had had a bad dream, one of those vivid ones that so impresses itself upon your mind that they are impossible to forget. Usually, for me, they have to do with some sort of tragedy that affects and injures me directly; I become paralyzed, people in my family are tortured and killed, or other such personal tribulations.

Last night, however, I had a nightmare of philosophy, of an abstract idea, and it chilled me to the bone.

It might seem at first blush that my dream was more similar to nightmares of personal pain, for I dreamt that a friend of mine from high school had died in a freak car accident. And while it is true that this concept scared and saddened me, what I found more affecting, and what my brain decided to focus on as I slept, was the idea that with her death, the world had lost an artistic genius.

I was forced by my dream to reflect upon the idea that I had directly experienced and been touched by the sort of person whose talent and work are truly exceptional. I had seen and talked and hugged and laughed and argued with a person whose ability is so great and yet seems so natural that it can make others certain of the existence of god, for it seems inconceivable to some that a person could have been the driving force behind what they had done.

Just as I felt honored and excited by the idea that I had been exposed to someone so rare and so precious, my brain brought me crashing back into pain and sorrow by reminding me that genius is just as fragile, if not more so, than the mediocre.

I woke up wishing that I didn’t have to live in a world where those who are of greater mind than I can perish, where with a single accident or poor choice the world loses not only a life that is precious in and of itself, but also a cornucopia of potential works of genius.

My brain showed me the nightmare image of a body, and every potential work of genius that it could create, being consumed by flame.

It’s an idea that will haunt me to my last.

by cwknight in Essays, Philosophy

I was talking with my boss today and he happened to tell me about a philosophical idea that I had never heard of. In Judaism, he related, there is an idea that the good works that get you into heaven are not the grand gestures that we typically associate with charity, but small moments of annoyance whereby we give someone else some pleasure. As an example, he offered the scenario of listening without interruption to someone that you find boring. After my initial suspicion that he might be subtly hinting at the stores in heaven that he had accumulated in the course of our conversation, I realized that this was a truly beautiful and elegant concept.

Because of the principle of risk vis a vis reward, great tribulation and sacrifice necessarily incur a greater likelihood of earthly reward. Those who donate a substantial sum to a charity are likely to receive immense social benefits. But to endure an annoyance where there is no benefit is a genuine indicator of strength and lack of moral turpitude.

Though I believe not in heaven nor hell nor grand judgment, I am moved by this philosophy to try to work through life’s annoyances with grace and humility. For just as the annoyances ostensibly offer the greatest personal reward, so too can they eat away at us and cause the greatest personal emotional destruction. So take this and be refreshed with a sense of perspective. We could all stand to relax and not sweat the small stuff.

by cwknight in Essays, Philosophy

I’m not sure how it happened, but I have become one of those wretched and despicable things. No, not a writer; I am fully aware of how that sickening lycanthropic transformation occurred. I’m referring, rather, to the subtle corruption whose dark seeds germinated in my youth, and took root in my soul as I transitioned into adulthood. It choked my youthful jocularity, dulled my noetic sensibilities, and fertilized the fruits of my despair.

I became, through no fault of my own, a Carny.
END_OF_DOCUMENT_TOKEN_TO_BE_REPLACED